The latest new track that was released today by Steven North is titled ‘Archangel Michael – Bells of Panormitis’ which is one of the singles from the Heart Activation Music range by Steven & Amy North. 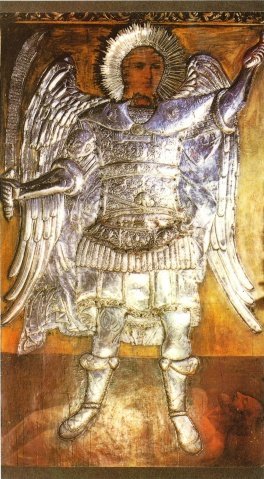 The title of this song was rather interesting as I realised during the creation of this track, that I was actually working with Archangel Michael. Said to him, “I cannot think of a song title” and I hear “look up Bells of Archangel Michael & Poseidon” as a response. My first thought was… “What, there’s mermaids involved!!!” and looked it up and what I found was very remarkable.

The very first link that I found was an Orthodox Wiki that referred to Archangel Michael of Panormitis. This refers to an icon of Archangel Michael on the island of Symi, Greece. The article goes into the history of the Monastery of Archangel Michael but what stood out the most for me, which is why this is so very important to highlight is that the church was built over, as other sources suggest, a temple to Apollo.

This in itself is absolutely remarkable because on the site of an ancient temple dedicated to the pagan god Apollo was a monastery of Archangel Michael built.

On the 6th of July 2015, I was led to asking a question to Archangel Michael about Apollo. Certain texts on the internet, spoke about Apollo being the Creator God known as Heru or in Ancient Egypt, Horus. In the reading with AA Michael through Jocelyn Joy Thomas. Archangel Michael responded with this, which to me is of great interest.

The funny thing about names, a lot of them are given to the same source, more or less we are talking about one energy and many different names throughout various cultures. It is what you are most comfortable with when it comes to names. You can see then with Apollo, and me that the energy is one of great strength, a warrior energy, honour, valour, creation is at the mercy of these types of strengths but always there is gentleness, patience and keen awareness of exactly what is needed. This is the strength that lies in the holy paternal which is meant to be coupled with the holy maternal.

So what we are seeing here is that Archangel Michael and Apollo are the same consciousness, they are the same being just given a different name. So it’s truly fascinating that in this place known as Symi in Greece. The temple to Apollo was replaced with the Archangel Michael monastery and it is an icon of the same deity/god/archangel and that is how this song was titled… “Archangel Michael’s – Bells of Panormitis” as it makes reference to this one remarkable place which I believe he is very fond of and if visiting that area of the world, definitely visit it because I am led to believe that you will be able to physically feel his presence in this one place.

The Creation of the Track

The journey of this track was originally experimenting with a different style of music and how
I could combine a lovely beat with an ambient sound. Later on into the track, I discovered that we were writing a track with Archangel Michael, Archeia Faith and with any creation, my beloved Amy North.

In the words of Archangel Michael: The frequencies that are held within this song is to assist you with working through the illusion of victim-hood, of slavery, the need to be of service and searching life for purpose. The purpose of life is life itself, to explore, to love, to create, to co-create and to bring forth changes to your world, to your life and by doing so, you will bring changes to the many. Many people are wanting stuck in the idea that they must be of service to another when they are not, by being yourself, you are fulfilling this ‘quota’ if you wish to call it that. By living on this planet, by being happy, being love, enjoying the most of life, you will create the garden of Eden that many have spoken of for thousands of years.

If you listen close enough to the frequencies within the song, you will feel my presence within the music, helping you to break free from the old system and helping you to regain your own confidence in self. My beautiful friends, you are amazing beings and we are so grateful for allowing me to work with you and assist you with this.

Together, as one, we can clear much together, open your heart and allow the drums, the bells, the sounds to take you to a safe place so that we can introduce you to yourself.

May the love of the father, the mother and the universes be with you forever in your heart.

I AM Archangel Michael with Archeia Faith, Steven and Amy North.
www.stevennorth.com.au

You can purchase this song from http://cdbaby.com/cd/stevennorth9 very very soon.